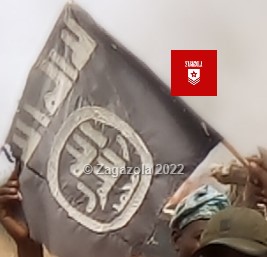 It was gathered that the insurgents met their waterloo while returning from a looting mission along Nguma village, in Biu Local Government Area of Borno state.

An Intelligence Officer, told Zagazola Makama, a Counter Insurgency Expert and Security Analyst in the LakeChad, that the terrorists on three Guntrucks, and one motorcycles were returning from the axis between Sabongari and Multe when one of its vehicle, a Toyota Hilux ran over an Improvised Explosive Device(IEDs).

The sources said that the self-inflicted destruction consumed six of the Boko Haram criminals while others suffered severe injuries.

Consequently, angered by the incidents, the terrorists vented their anger and eliminated a Fulani man, his wife and son.

The sources added that they later picked up the dead bodies of their deceased Mujahedeens and left the scene.