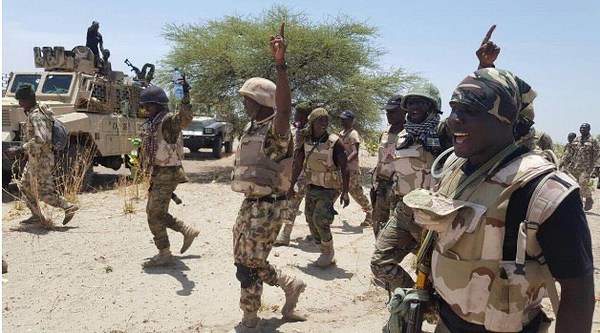 The Troops of the  Nigerian Army said killed several insurgents  fighters after it cleared five  suspected Boko Haram terrorists hideouts  in the North East of  Mafa in Borno State.

It was gathered that the  troops of 112 Battalion, under 24 Task Force Brrigade, Operation Hadin Kai, along with some Civilian Joint Task Force embarked on a fighting patrol to suspected Boko Haram hideouts in Bulakulari, Gwari gwazo, Loskori, Limanti and Gaza villages on Dec. 3, 2022.

An Intelligence Sources, told Zagazola Makama, Counter-Insurgency Expert and Security Analyst in the Lake Chad, that the troops made contact with  the terrorists in the course of the counter offensive patrol and

eliminated unspecified numbers of them in one of the villages.

The sources said that the troops, led by one Lt. Col. Obiyanyo, decisively neutralised members of the terrorists group supposedly using those areas to attack own troops and other law abiding citizens along Ngwom – Mafa – Maiduguri road.

He added that a total of 40 bicycles  were captured along with several other items including weapons.

Meanwhile, troops made sure that the entire area were cleared of all suspected terrorists elements.