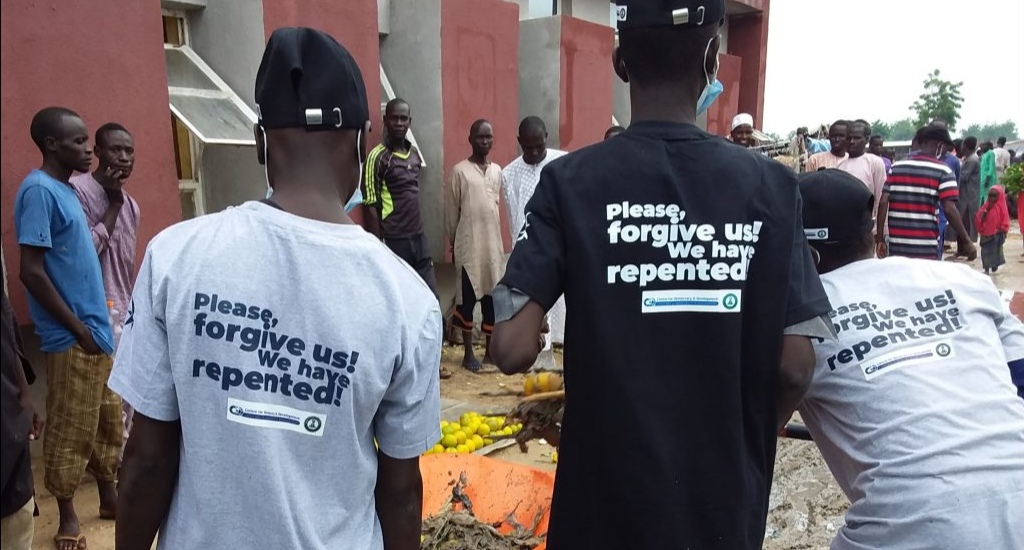 Some repentant Boko-Haram members were on Saturday engaged in sanitation of maiduguri as part of measures preparing them for reintegration.

The exercise was organised by Centre for Democracy Development (CDD), in collaboration with the Borno Government.

Speaking on the exercise, Prof. Mala Mustafa, a Senior Research Fellow with CDD, said the development was to prepare them for community services as part of the reintegration process.

“The rational behind this exercise is for CDD to support the Borno State Government as part of preparatory work for the reintegration of the ex-combatants.

“We felt it’s imperative to change the narrative, particularly the negative perception about them among community members.

“We want to rebuild relationship and trust between those that surrendered and community members,” Mustafa said.

He explained that 400 of the repentant insurgents had been mobilised for the exercise with 50 of them participating this Saturday for a start in Maiduguri Hajj Camp that is housing over 12,000 of the repentants and thier families.

Mustafa said the exercise by the repentants would be gradually extended to some selected communities in Maiduguri and its environment.

According to him, the repentants have been provided some training, particularly on civic education on how to deal with the challenges of stereotyping, while some Islamic clerics handled them on extremism.

Also, the Special Adviser to Governor Babagana Zulum on Security, Gen. Abdullahi Ishaq, lauded the Initiative by CDD which he said had been supporting the reintegration process.

“CDD provided the equipment for this exercise and has been providing us with technical advice as good partners,” Ishaq said.

He noted that the “Sulhu Alheri” initiative taken by government after years of the insurgency, had led to unprecedented number of insurgents surrendering which led to improved peace in affected areas of Borno.

“Today, Maiduguri is more peaceful than Abuja. We want to continue to call on communities to support this sulhu (peace) process by accepting them,” Ishaq said.

He called for more support to Borno government from well meaning Nigerians and organisations in facilitating the process which required funding and other support.

Some of the repentants wearing T-shirts bearing inscriptions like “Please forgive us! We have repented” and “Let’s rebuild Borno again”, called on the public for forgiveness and acceptance for more peace and progress of the state.

Recallrd that over 70,000 insurgents and members of thier families have surrendered to the authorities as at July 29.