Zagazola - Mercenaries and the Unholy Alliance Between Bandits and ISWAP 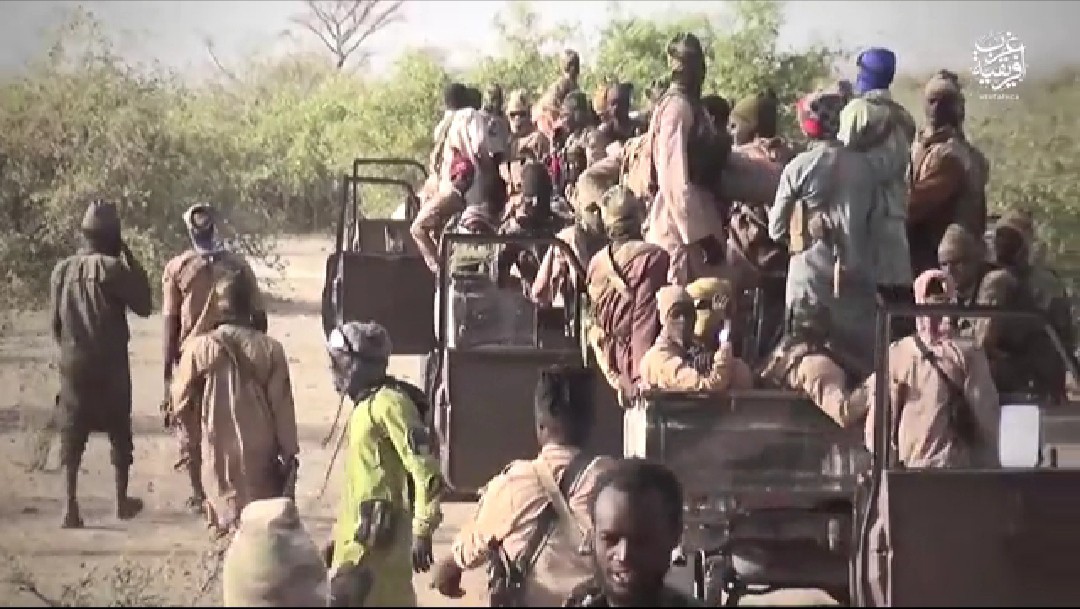 The nation went to bed on Monday 28th March 2022 shocked and saddened by the tragic attack by terrorists on the Abuja-Kaduna train that resulted in senseless loss of many innocent lives and kidnappings of many some of whom I know personally.

Our thoughts and prayers are with the families of those who lost their lives, we also pray for the speedy recovery of the many still missing. I call on the state and federal governments not to relent until everyone is safely reunited with their families.

The moment I heard the news of the attack and how it was carried out, I strongly suspected that it was the handiwork of ISWAP and not the ragtag bandits that we met in our visit into the forests of 8 states in Northern Nigeria with Sheikh Dr. Ahmed Gumi

I clearly remember two years ago, Sheikh Gumi would tell me with a sense of urgency that we must reach out to these bandits and preach to them to repent and drop their Arms before Boko Haram-ISWAP get to them with their twisted ideology. Indeed, Abubakar Shekau, the dead Boko Haram leader released a video condemning Sheikh Gumi’s entry into the forests because he knew it would be a threat to their efforts of reaching out and recruiting these bandits.

Any strategic alliance between bandits and ISWAP will give ISWAP the geographic reach it has coveted for years. An alliance with bandits; a fearless, drug fueled, battle tested “army” that knows the vast terrain of Nigeria’s ungoverned spaces will undoubtedly be a formidable force of evil that will be an existential threat to the nation.

ISWAP has a history of blowing up infrastructural facilities like they have done in Borno state. Majority of Nigerians are not aware because it has not been well reported but, Maiduguri the capital city of Borno State has been in darkness without electricity since January 2021, a period of 14 months. This is because BH-ISWAP insurgents blew up transmission lines into the city twice.

{2}. The audacity and sophistication of the attack is classic BH-ISWAP

{3}. The chanting of the words “Allahu Akbar” and other religious phrases by the attackers when they entered the train is usually associated with Boko Haram-ISWAP insurgents not bandits

{4}. The reports by some passengers that escaped the attack that buses were used to convey those kidnapped is a pattern that is new to bandit attacks.

{5}. The video of the captive they released on Wednesday 6-4-2022 on “compassionate grounds” because of his age is a classic way ISWAP operates.

{6}. Boko Haram Terrorists of the Abubakar Shekkau mold would have killed him outright on account of his being a ‘Kafir’ (infidel).

{7}. The regular ragtag bandits would, on the other hand, demand for ransom before releasing their captive.

BANDITS IN KADUNA STATEKaduna State has over the years become infested by a combination of terrorist groups including Bandits that have alliance with ISWAP, Boko Haram and members of the Ansaru terrorist sect. Unconfirmed reports point to a bandit leader called Kachalla Ali as the leading bandit leader responsible for the train attack of March 28, 2022 in partnership with either ISWAP or Ansaru insurgents. Time will tell the full extent of this unholy alliance.

BOKO HARAM PENETRATING THE NW & NCIt is not accidental or from lack of trying that, all these years of Boko Haram’s existence even before they picked up arms, it did not get acceptance by Muslims in the Northwest especially in Kano the largest city in the North. The efforts of this terrorist organisation to get a foothold in this geopolitical zone were thwarted by the proactive behind the scene tireless efforts of the Traditional rulers and Clerics in the Northwest who aggressively preached to their followers against joining them. Now, they seem to have the access they have been seeking through the alliance with some bandit leaders.

Bandits-ISWAP terrorists have now literally blockaded the city of Kaduna which cannot be reached freely and safely either by road, rail or air. Their strategic goal is targeting major national infrastructural facilities like transportation (road, rail & air), power and telecommunications.

Implications of a Bandits – ISWAP AllianceThe dangerous alliance between these 2 terrorist groups exponentially compounds the nation’s already worsening security challenge. Battle hardened Bandits aligning with ISWAP terrorists with their twisted religious ideologies and international connections and fundings is a serious threat to Nigeria’s national security. Bandits know the vast terrain of the country’s ungoverned spaces. In none of our visits to the forests did bandits tell us about having any grievances with the federal government or the Military, their alliance with ISWAP will definitely change all that. Some bandit leaders may have been pushed into this unholy alliance with their kindred spirit (a fellow terrorist group) as a way of self preservation.

ZAMFARA: BANDITRY HQ. (BHQ.): I must admit that I am not privy to the intelligence but, It is very likely that the bandit group that ISWAP partnered with for this dastardly train attack can be traced back to Zamfara State, the headquarters of banditry in Nigeria. It is estimated that about 70% of bandits in Nigeria are originally from Zamfara State. This is the Zamfara that I spent my formative Secondary School Years in. What happened and how we got here are questions that must be asked and answered. Understanding the genesis and reasons why Zamfara is the nidus for this tragic conflict is crucial to finding solutions to banditry in Nigeria. Nowhere in the history of warfare have conflicts like this been won on the battlefield.

ENGAGEMENT OF FOREIGN MERCENARIESGov. Nasiru El-Rufai of Kaduna State publicly threatened that he and his fellow Northern Governors will employ the services of Foreign Mercenaries if the Nigerian Military fails to control the spiraling insecurity in the country. These are the reasons I thought Gov. El-Rufai’s outburst was reckless and dangerous:

(i). He was issuing a direct threat to the President and Commander in Chief of the Nigerian Armed Forces and the Military

(ii). No President would issue such threats to his Military publicly

(iii). No section of the Nigerian Constitution empowers any State Governor to hire foreign Mercenaries.

(iv). He was threatening to counter the March 11, 2021 directives of the President against employing the services of foreign mercenaries.

(v). Not even the President would contemplate taking such decisions without consulting with the Military.

RT. Hon. Rotimi Amaechi: The Hon. Minister of Transportation, Rotimi Amaechi blamed the tragic train attack of 28-3-2022 on the failure of the federal government to approve and release funds for a security installation proposed by his Ministry.

POLITICAL GRANDSTANDING:The statements of both Gov. Nasiru El-Rufa’i and Hon. Minister Rotimi Amaechi following the tragic attack hasn’t been helpful. Sen. Abdullahi Adamu the Chairman of their Party (APC) said as much when asked to comment on what they said; “You don’t take a knife and rip open your belly”.

These two APC Party stalwarts are in my opinion, too clever by half. They are just looking for an off ramp to jump off this sinking ship and distance themselves from their collective failure as a government to secure the nation and protect our people. Their scapegoats of choice are the Military in the case of Gov. El-Rufa’i and the Federal Executive Council in the case of Rt. Hon. Amaechi. Nigerians are wiser and have little or no patience for their political Shenanigans.

POLITICIANS: At a time when the nation is facing the worst insecurity of our lifetime, our politicians are preoccupied with the scramble for offices in 2023. They are disconnected from the daily realities of our people

2023 ELECTIONS: Deteriorating insecurity is a big threat to our fragile democracy. Credible elections will be impossible in many states where millions of people have been displaced from their homes and people are not secure to come out to cast their votes.

MAULUD GATHERING IN GUSAU: I watched in amazement as a sea of faithfuls in their hundreds of thousands gathered in Gusau the capital city of Zamfara State for the 3 day annual Maulud prayer gathering on March 5, 2022. All of a sudden the guns fell silent, there was no deployment of security agents but the event went hitch free without incidence. I asked myself if there was a truce with the bandits to allow temporary peace to reign during the events. It may seem paradoxical but in spite of their ungodly criminal activities, these bandits still believe they have faith and hold Clerics in high esteem. These Clerics should be used as a pathway to peace.

ROLE OF TRADITIONAL AND CLERICS: Just as Traditional rulers and Clerics played a crucial role in denying Boko Haram a foothold in Northwestern Nigeria in the past, now is the time for the federal government to get involved by actively engaging these leaders not only in the fight against banditry but in prying these bandits away from joining or aligning with Boko Haram, ISWAP or ANSARU.

POWER MAPPING:Most of the bandits are local and indigenous to their areas of operations. Identifying them and their areas of influence is crucial to understanding their motives, character and membership strength. Equally as important is identifying and using as interlocutors their parents, teachers, inlaws and other influential relatives who are well known and live in the local villages. These important influencers have never been reached out to as partners for peace.

PRAYERS :No efforts should be spared in safely rescuing and reuniting all people kidnapped with their families

Traditional rulers and Clerics are strategic stakeholders for peace.

May God Almighty guide us and our leaders to do that which is right and just, heal our wounds and bring peace to our land. Amin