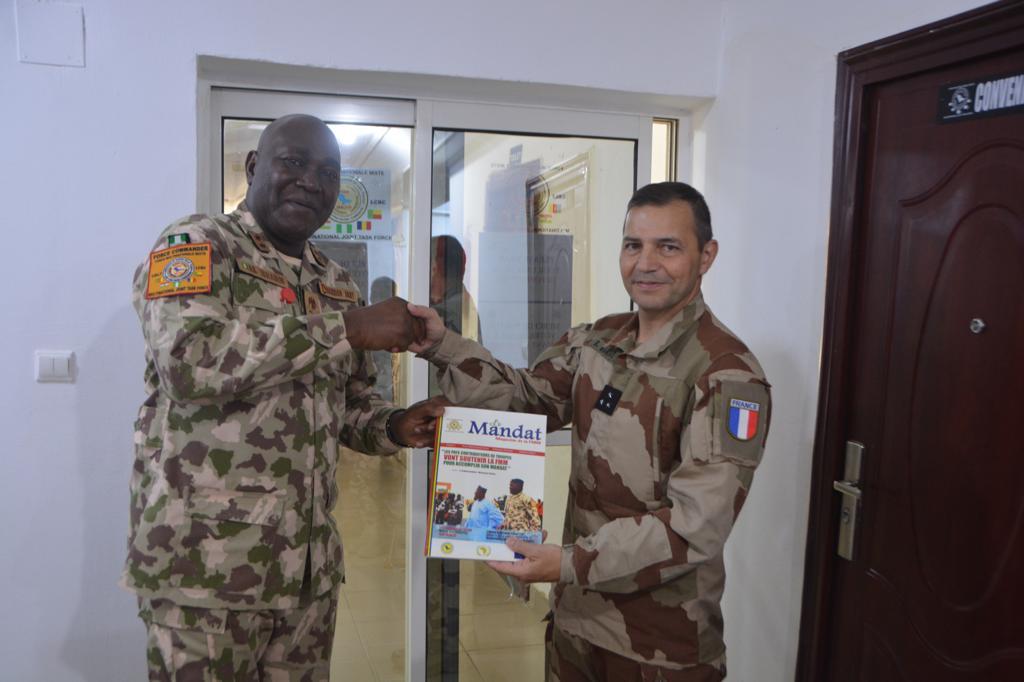 1. The Force Commander (FC) Multinational Joint Task Force (MNJTF) Major General Abdul Khalifah Ibrahim on Tuesday 9 August 2022 received the newly appointed Force Commander Operation Barkhane, French born Major General Bruno Baraz who was on a familiarization visit to the Headquarters MNJTF Ndjamena Chad. After the traditional welcome courtesies, the new FC was given a detailed brief on the history and activities of the MNJTF. The FC MNJTF in his remarks congratulated the newly appointed FC Op BARKHANE on his recent appointment noting that the MNJTF was very happy to have such an accomplished general visiting. He further appreciated the existing cooperation between Op Barkhane and MNJTF and pledge to sustain it. He equally conveyed his appreciation to Op Barkhane for their stabilizing role and fight against terrorism in the region and assured the new Commander of his desire to work with him in tackling terrorism in the region.

2. In his remarks, the FC Operation Barkhane General Bruno Baraz appreciated the FC MNJTF and the entire MNJTF team for their efforts which have to a large extent brought stability to the MNJTF area of operations. He further expressed his desire to work closely with MNJTF and indeed other partners to achieve the collective mission which is the return of ultimate peace. Operation Barkhane is a French led ongoing anti insurgent operation that started in 2014 against Islamist groups in the Sahel region. The Deputy Force Commander, Chief of Staff, Commander Centre for Coordination and Liason (CCL) and other MNJTF heads of cells were present during the visit.

3. In another development, the Outgoing Commander Sector 1 MNJTF (Cameroon) Brigadier General Bouba Debekreo on Tuesday 5 August 2022 brought his successor Colonel Pierre Loti Tiokap for an introductory visit to the MNJTF. The new Commander was given a brief on the MNJTF to fully acquaint him with the operations and activities of the Force while also welcoming him to the MNJTF family as well as acquainting him with the future plans. The outgoing Commander thanked the FC for his support and guidance and requested for same for his successor.

4. The FC in his remarks praised the outgoing Sector 1 Commander who has been a founding commander of the MNJTF since the inception of the Force in 2015. He praised his professionalism and wished him well in his new assignment while also urging the new Commander to do same. The new Commander said he is happy to join the team and would work collaboratively to achieve the mission of the MNJTF. Both visits were hitch free.